Sale on canvas prints! Use code ABCXYZ at checkout for a special discount!

Empty Bed included in the digital display at the Louvre

Yesterday I received a letter telling me that one of my work was selected for the exhibition at Musee du Louvre in Paris.
The selected image is called "The Asylum Project - Empty Bed" and will also be included in the blacl and white collection book from the exhibition. The image is on sale here and also as signed, limited edition from www.erikbrede.com

Your photography was included in the Black & White Collection
and was presented at a private reception at hosted at:

House by the Sea to CBS television series

My image House by the Sea, from Oslo, Norway, is on the way to CBS's TV-series "Under the Dome". Release form is signed, and I'm honored to be asked.

My picture as album cover

My picture "The Asylum Project - The Empty Chair" is used as album cover on Darren Parrys latest singel "So Into You" - http://www.youtube.com/watch?v=u0Gzwa50Dis. I'm so honored :-)

Also available as a one of a kind Signed, Single Edition fineart print from Artfinder.com (https://www.artfinder.com/product/the-asylum-project-part-viii-the-empty-chair-limited-edition-1/)

30"x20" Canson Edition Etching Rag 310gsm printed as a Single Edition. Signed on the front. The image comes with a signed certificate of authenticity and Ships within 11 to 14 business days. 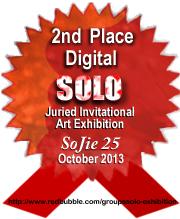 Nominated to exhibit in SoJie 25

I am very excited to have my art selected, from over 74000 works of art, to exhibit in SoJie 25. SoJie 25 takes its name from the first letters of Solo’s Juried Invitational Exhibition. This month is only the 25th one, ever, and 60 other artists, besides myself, are represented.